Every year, wildfires destroy thousands of homes and businesses all over the United States. However, they also can rejuvenate the environment if they stay relatively controlled. If a fire burns too much land and plants, then it could decimate entire ecosystems. Moreover, in recent years, scientists found that global warming is causing an increase in wildfire rates and damage. These fires not only start more frequently now, but they also are burning uncontrollably and destroying biological networks.

How They Are Formed

Fires require three things for them to burn: a heat source, fuel, and oxygen. Firefighters commonly refer to these as the fire triangle. A heat source is anything that helps create the first spark and heat fuel to the point that they ignite. Some typical examples of heat sources are lightening, cigarettes, the sun, campfires, and even hot winds. The fuel is any flammable material near the fire, which includes trees, brush, grass, and even homes. Lastly, flames need oxygen to burn, and the atmosphere supplies the fire with a plentiful of oxygen.

Nowadays, human negligence is the culprit behind four out of five wildfires. However, nature can start fires as well. Dry, summer weather converts previously lush, green vegetation to bone-dry fuel for wildfires. Furthermore, nature can catalyze a wildfire via strong winds to help the fire spread faster. Combining these factors, all that is needed is a simple spark to cause a fast-spreading wildfire.

How to Control or Stop Them

Traditionally, firefighters can douse the fire with water or fire retardants to extinguish existing flames. However, before they do that, they need to confine it and prevent it from spreading further. Firefighters accomplish this by depriving the fire of the fundamental fire triangle. By clearing vegetation, it creates firebreaks that deplete the fuel necessary to maintain the fire. Essentially, firebreaks starve wildfires to slow them down and stop them in their tracks. Firefighters also obstruct fires via controlled burning. While this may seem counter-productive, a controlled burn rids the forest of dead, dry undergrowth and bush that normally would serve as a catalyzing fuel for a wildfire.

How Does Global Warming Cause More Wildfires? 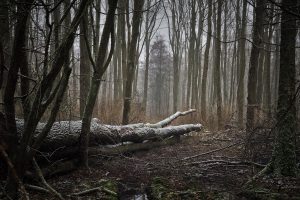 As the climate continues to warm, it changes the moisture and precipitation levels. These changes cause wet areas to become wetter and dry areas to become drier. Furthermore, the increased temperatures in the spring and summer combined with the earlier spring snowmelt cause droughts. With the soil remaining drier for an extended period, all it takes is a small spark to ignite a raging wildfire. Additionally, the dry conditions also make it difficult for firefighters to put out a wildfire. Therefore, these fires are burning larger areas.

Scientists have further studied the effects of global warming on wildfires. They found that, between 1986 and 2003, wildfires occurred more than four times as often. They also saw that these fires burned more than six times the average land area and lasted approximately five times as long as previously documented wildfires.

Global warming has already taken its toll on some forest ecosystems by creating a dry and hot environment. In previously high, moist elevations, the vegetation often does not recover after a wildfire because they struggle to accommodate the new arid climate. Instead, new tree and plant species that are better adapted to the new environment take their place.

In a recent study, scientists measured seedlings in areas that had previously suffered from a wildfire. They found a dramatic decrease in tree regeneration in recent fires in comparison to fires that occurred earlier this century. After 2000, the proportion of wildfire sites with no vegetation regrowth almost doubles from 19% to 32%.

Furthermore, trees and plants often serve as vital shelter and food sources for many animals. Without the natural foliage, many animal species will disappear from the area because they cannot acclimate to the new environment.